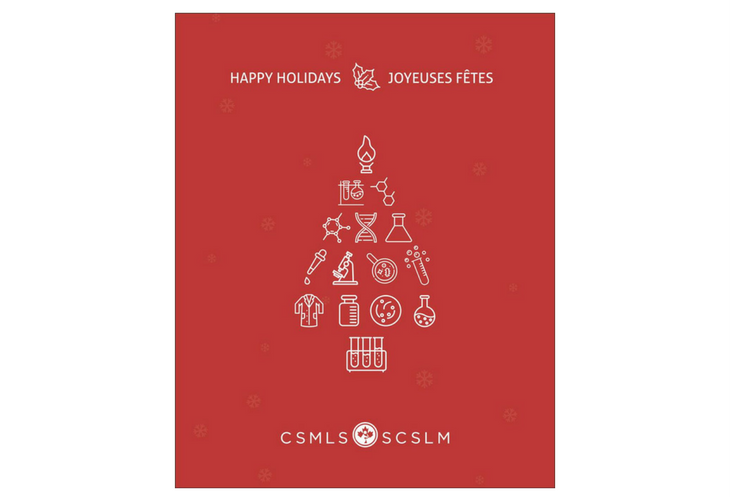 From all of us at CSMLS, we wish you and your loved ones a safe and happy holiday season!

Fentanyl test strips don't always detect the presence of the deadly opioid and could give drug users a false sense of security, Health Canada is warning. Demand for commercially produced test strips has boomed as recreational drug users and harm-reduction workers try to stop the rising number of deaths due to street drugs laced with fentanyl. The Health Canada study compared fentanyl strip test results with its professional laboratory test results on 70 samples of drugs. Most of the samples "contained chemically similar drugs (fentanyl and analogues with similar chemical profiles, such as carfentanil)," department spokesman Eric Morrissette told CBC News in an email. In 63 of the samples, the test strips "accurately identified that opioids were present," he said.

But in three samples, the fentanyl test strips gave false negatives, indicating no opioids were present, when the lab tests indicated they were.

The strips showed false positives for opioids in two cases, and gave "invalid results" in two others. In its next phase of assessing fentanyl test strips, Health Canada plans to use them with a greater variety and number of drug samples.

​The Ontario Coalition for Lab Reform wants to make sure Ontario labs serve patient interests first and operate transparently. The group, made up of small laboratories, doctors, patient groups, and others, sent letters to all Ontario MPPs in late November in personalized test tubes and held a press conference at Queen’s Park on Thursday, urging politicians to learn about the lab system in Ontario before regulations are amended next year.

In Ontario, a mix of service providers perform lab testing, but hospital laboratories make up 47 per cent of the market, and community laboratories, run by private corporations, account for another 46 per cent, according to the Auditor General of Ontario’s 2017 annual report, released in early December. The remaining tests are performed at Public Health Ontario labs and physicians’ offices.

In 2015, a Lab Services Expert Panel, commissioned by the provincial government, said in its report that its “greatest concern lies in the complete absence of formal performance contracts and service level agreements with individual laboratories to clearly identify roles and responsibilities and deliver better value.”

The Ministry says further regulatory amendments will happen in fiscal year 2018/19 — two under the Laboratory and Specimen Collection Centre Licensing Act and one more under the Public Hospitals Act. The spokesperson said no further policy details were available at this time.

Read more about The Ontario Coalition for Lab Reform and their concerns by clicking on the article title above.

Improving the quality of point-of-care testing

The following abstract has been copied from the journal, Family Practice.

Background It is suggested that new models of primary care should have better access to test results through the use of point-of-care testing (POCT).

Objective To determine whether quality management of POCT leads to better results.

Results Three databases were systematically searched using key words relevant to POCT and quality management, covering from 1945 to January 2017. Titles and abstracts were reviewed for relevance and papers selected for review and data extraction. Five observational studies were found in which the performance of POCT for specific analytes in external quality assurance (EQA) programmes was used to assess improvement over a period of time, varying from 3.5 to 15 years. The tests monitored were HbA1c, urine albumin, C-reactive protein, glucose and haemoglobin. In each case, the performance of the test against defined analytical criteria was used to judge improvement in performance. Different summary performance criteria were used, including the imprecision of results over a period of time (two studies) and meeting defined target values for bias and imprecision of measurement (three studies). Performance improved with time and was associated with regular participation in EQA schemes and with the use of internal quality control (IQC) procedures.

Conclusions These findings indicate that adoption of quality management for POCT, including participation in IQC and EQA, with the support of laboratory medicine professionals, will improve the quality of the results ‘produced’.

Because it is available using dry slide technology, VITROS ALTV Slides confers several operational and clinical advantages for the clinical laboratory and physicians, including low patient sample volumes needed for testing, extended calibration stability and minimal storage space requirements, along with excellent precision performance and low-end sensitivity. Dry slide technology is unique in that it does not require water, plumbing and drains, or the need to dispose of water as medical waste. It also eliminates the need for high quality water as a requirement for testing. This "waterless" environment makes dry slide technology ideal for a broad array of testing environments.

According to Dr. Fernando Chaves, Ortho's global head of medical and scientific affairs, "having a very high quality ALT liver function screening test to assist physicians in diagnosis and treatment is critically important, as liver disease rates have been steadily increasing over the years. The worldwide prevalence of people with chronic hepatitis C is estimated at 130-150 million people, with 350,000-500,000 deaths due to HCV related complications per year. Many of those infected are unaware. In addition, the estimated global prevalence of cirrhosis alone ranges from 4.5 to 9.5 percent of the general population and is likely underestimated as almost a third of the patients remain asymptomatic."

Believe it or not, a tropical blood parasite native to Latin America could be harmful to Canadians. Infectious diseases like malaria or Zika may have dominated recent headlines but Chagas - the "Kissing Bug" disease - is in the spotlight following the publication of a new case study in the Canadian Medical Association Journal (CMAJ).

Tropical and laboratory medicine experts from Winnipeg and Montreal warn natives of specific Central and South American nations and their offspring are at risk of contracting Chagas disease - even after they have moved to Canada. The study reports on a family case of transmissions from mother to unborn children, raising questions over prevention and diagnosis of Chagas disease in Canada, where thousands of individuals live with potentially undetected infection.

Chagas disease is caused by a parasite called Trypanosoma cruzi, which is mostly found in Latin America and, occasionally, in southern parts of the United States. It spreads through the bite of triatomine - bloodsucking insects targeting a person's face, referred to as "Kissing bugs." The parasite is transmitted via the bugs' feces: The insects defecate while feeding, allowing the parasite to move on to its new host. The disease can spread via transmission from mother to child during pregnancy and from infected blood transfusions or organ transplantation.

"Chagas disease is a real public health problem due to the transmission from mother to child (baby) up to at least three generations," says co-author Dr. Momar Ndao, a scientist from the Infectious Diseases and Immunity in Global Health Program at the Research Institute of the McGill University Health Centre (RI-MUHC), and an associate professor in the Department of Medicine at McGill University. "As Chagas disease is not a notifiable communicable disease in Canada, there are little data on the number of undiagnosed, untreated cases."

TB, or not TB? At last, a urine test can diagnose it quickly

A urine test for tuberculosis could make it much easier to identify the disease and treat it before it kills.

There were more than 10 million new TB infections in 2016, and the condition killed 1.7 million people. In around 40 per cent of cases, the infection isn’t identified until symptoms become obvious.

TB is currently diagnosed using a skin test, or by culturing bacteria from a person’s sputum. But both these methods take days to give results, and can only be performed by trained microbiologists.

Now Alessandra Luchini, of George Mason University in Virginia, and her team have developed a urine test for TB that gives results in 12 hours. The test detects a certain sugar that coats the surface of TB bacteria, which usually ends up in infected people’s urine in low concentrations.

The test uses tiny molecular cages embedded with a special dye that can catch and trap these sugar molecules. This makes the test capable of detecting the sugar at low concentrations, making it the technique as much as 1000 times more accurate as previous methods for detecting TB in urine.

When the team tested their technique, they correctly identified 48 people with TB. Luchini now wants to make the test easier to use, and test it on thousands more people. If all goes well, it could be available within three years, she says.

Scientists in Boston have developed an automated artificial intelligence (AI)-guided microscopy system that can help diagnose serious bloodstream infections (BSIs) quickly and accurately. The technology, which uses a trained convolutional neural network (CNN) to recognize the different shapes and distribution of pathogenic bacteria, could help to speed diagnosis and potentially save patient lives, as well as address the current lack of trained microbiology technologists, suggest its developers at Harvard Medical School and Beth Israel Deaconess Medical Center (BIDMC).

“This marks the first demonstration of machine learning in the diagnostic area," comments James Kirby, M.D., director of the Clinical Microbiology Laboratory at BIDMC, and associate professor of pathology at Harvard Medical School. "With further development, we believe this technology could form the basis of a future diagnostic platform that augments the capabilities of clinical laboratories, ultimately speeding the delivery of patient care." The researchers report on the technology in the Journal of Clinical Investigation, in a paper entitled “Automated Interpretation of Blood Culture Gram Stains using a Deep Convolutional Neural Network.”

The mortality rate from BSIs can be up to 40%, and every day’s delay in starting appropriate treatment increases the risk of death, so fast identification of the causative bacteria is critical. Initial diagnosis is based on the Gram stain smear, but human interpretation of Gram-stained slide images is "labor and time intensive, and highly operator-dependent," the authors explain.  “With consolidation of hospital systems, increasing workloads, and potential unavailability of highly trained microbiologists on site, automated image collection paired with computational interpretation of Gram stains to augment and complement manual testing would provide benefit.”

Thanks to a Simulation and Clinical Placement grant from the Canadian Society for Medical Laboratory Science, medical laboratory technology professor Sheri Johnson Purdon and her student assistant, Aislinn Michie, are digitizing up to 100 slides and uploading them so that students can study, identify, and be tested on their skills online, without using a microscope.

A single millilitre of human blood can contain 5 billion cells that can reveal signs of health or illness.

"Quickly and accurately identifying these cells requires training, experience, and keen attention to detail," Johnson Purdon said in a release.

Using a digital camera paid for by the CSMLS grant, Michie is photographing each physical slide in the college’s inventory to create a digital slide bank.

“The inventory of digital slides we’re creating will help students gain experience with cell identification and counting, and it will help employers test students’ competencies before and after clinical placements,” Johnson Purdon said. “We’ll also identify the attributes and characteristics found in each digital image so it’s easier to quickly and accurately assess the students’ work.”

Millions of diagnostic tests are conducted in Ontario every year for medical diagnoses, treatment, research, and even legal or forensic purposes. According to the CSMLS, innovative teaching and assessment tools like the digital slide bank Johnson Purdon’s creating will be required to help train enough medical laboratory technologists to fill a growing number of jobs in the field.

We appreciate that you have taken the time to read LabBuzz. This is a CSMLS venture to provide relevant medical laboratory news to its members.

We need your help to grow this newsletter! Please pass along the subscription link to any colleague you think would benefit from hearing about med lab news.

No spam, ever. We'll never share your email address and you can opt out at any time.